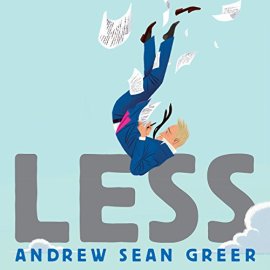 I knew going in that this was billed as a comedic novel–and indeed, I laughed out loud more than once. That’s no small feat; my sense of humor, especially in books, is quite particular. But I always like my laughter to come amid sadness and poignancy, and although the tone here stayed lighter and closer to satire than my usual preference, it packed a punch in, too, around love, and aging, and the shape of a life as seen from the middle as you start down the slope. (What do you end up with if you have a series of relationships rather than a life-long commitment? What is it, really, to be alone? To be wanted? Remembered? Accomplished?)

So we have Arthur Less, a writer whose success was never great but is now on the decline, cobbling together a trip around the world to avoid his ex’s wedding and his own 50th birthday–and we get wacky, slightly humiliating episodes piled on one another, interspersed with memory and reflection in a way that mostly worked. (In one scene, a conceited competitor tells him his problem is that he is a bad gay; in another, he recalls specific activities his father arranged for him as a boy, which he enjoyed, and still enjoyed in memory even after learning years later that his father had taken them directly from a book about how to take your sissy son and make him into more of a real man).

The episodes themselves are often rather farcical. It’s entertaining, but also sad. If I’m going to read a book about a struggling male writer in middle age, this blows the pants off Who Is Rich.

(Also flagging without discussing: meta-fiction (Less is revising a novel where a middle aged gay guy wanders around the city, taking it from a drama to more of a farce); sneaky late revelation that there is actually a narrator, not just floating omniscience).